041511
—
it happened on a hot sticky summer day
to a small stranger in the smaller town of LA
sitting in the car across the street
waiting for some family
i watched the scene unfold…
for the rest of this story i will pray
Thy Justice be done, Thy Truth be told
about an incident nevermind how old
years ago, told in the first
this is how it went…

i turned to look
and from what i could see
it was a customer and store clerk
white man was loud
white man was angry
white man was red in his face
while the clerk stood calmly, i thought
‘this is more than mere retail work,
what the hell is wrong with this place?’
white man still shouting, my thoughts continued
‘where do we keep that can of mace?’

after a minute of offensive infringement
white man left the place still pissed
i could tell from where i sat
because his panties were in a twist
the clerk was frantic, on the phone
and i sighed relief, thought it was done

i pray that kid was not his son

“more shouting, slurs, epithets
in between the violent threats
this time so the kid could know…
i thought, ‘that’s it, cracker’s cracked, he’s being mean’
so i stepped out, stepped up, stepped in between
intent to bust apart the scene

first i turned to the clerk and asked the obvious:
‘is this idiot bothering? are you ok?
a beef with you is a beef with me
and i’m getting tired of his douchebaggery’
but he didn’t seem to have much to say

so i turned next to the red-faced man
‘hey you, what the hell are you doing?
this dude is my cousin, you cardboard shoe
any beef you have with him
you have with me and my entire family
and i don’t have any patience
for the toxic shit you spew’
but for some reason he wasn’t listening

let’s get real:
i didn’t have any hope for change from this idiot
he’s too far gone, been drunk too long
on his racist misplaced rage
so i turned instead to talk to the kid
hopefully still innocent, younger in age,
mustering the calm contact of a sage, i said
‘hey, i know you know it’s hard
but don’t pay too much mind to the toxic crap he spews
or his parasitic worldview will infect you, too
and eat you alive from the inside'”

“that’s what i wish i could have said
but i was only five at the time
and the big people i was with
could only sigh uncomfortably
and shake their heads, as if to imply
‘yeah it’s wrong but…
all’s well that ends well
no one hurt, no one dead…’
or ‘who are we to try and change his mind?
it could be dangerous, so let’s leave
before the scene becomes a crime…’
or ‘it’s just the way the world is,
love or leave it, get used to it, kid'”

what right do we have to fear for our safety
when we’re not the ones under attack?
and if i’m not there for others in need,
then when my turn comes, and they come for me,
who in Hell will have my back?

immigration: yet another example of sexist piggybacking on racism

i do not have a witty title for this.

A great introduction to and reposting of an equally-great article in Latina Magazine, embedded ironically amongst adverts featuring toothpick-skinny white models and french-sounding perfumes.

Let’s call it the intersection of racism and sexism, via immigration.  I fully and whole-heartedly support this blogger’s message to “these people condemning refugees,” amounting to a resounding

fuck you for every asylee you want to send home. These people need help, and you are sending them back to hell and, in many cases, certain death. I am not exaggerating to make you feel guilty — this is truth, and I hope you never have to live in the same terror these people do[…]

The press has done a decent job of reporting that a gas explosion did, in fact, happen.  And that it did, in fact, cause damage.   According to someone I know who lives in the area [emphasis mine]:

This is about 3 miles from where I worked in San Fran, and about 8 miles from where we lived.  Scary is right.  People were reportedly “smelling natural gas for days” prior to the explosion, so it’s undeniable that the gas was perfumed.  Whether they were reporting the natural gas smells through the appropriate avenues is unclear to me at this point in time.  San Bruno is predominantly a poorer neighborhood, with more dilapidated building infrastructure (and utilities to match I presume), than the surrounding neighborhoods (San Mateo, Daly City, San Fran).  I’m curious as well how much “traction” complaints from more “gentrified” neighborhoods have had amongst utility providers, in comparison to areas such as the predominantly hispanic (and economically denuded) San Bruno.

At this point, these are my assumptions, until proven otherwise:

1. The San Bruno infrastructure was in disrepair, especially in relation to wealthier and whiter surrounding areas
2. The neighborhood population did report the smell of gas/rotten eggs to authorities/the utility company
3. The utility company’s initial response was “we’ll look into it” (in a little bit…maybe…) END_OF_DOCUMENT_TOKEN_TO_BE_REPLACED

Cee-lo to civilization: FUCK YOU

So fall’s official jam (no, really, it was even playing in a super hipster Brooklyn club last weekend), Cee-lo Green’s “F**ck You,” officially has a video.

we live in a classist and materialistic culture where product and profit is more important than health and happiness…so i like to think that Cee-lo is not only saying fuck you to the people who literally buy into the bullshit (which includes all of us to varying degrees, including me), but also that he is giving a rousing fuck you to all of civilization for providing the fucked up bullshit to buy into in the first place.

is it a stretch? maybe…then again…maybe not:

So, it’s pretty easy, when you’re a Company Selling Fried Chicken (KFC) in a Racist Country (USA) to hit the racism mark when exporting that unique slice of American industrial food culture abroad.

A friend via Facebook provides some interesting context to the Aussie ad:

There’s no cultural explanation for the Korean ad, it looks pretty racist. But the Australian one requires a cultural perspective to fully understand. This is how some Aussies explained the ad to me: END_OF_DOCUMENT_TOKEN_TO_BE_REPLACED

Below is the letter, based on the suggestions about how to channel your outrage over Aiyana’s death. Also, for a great analysis of the role “reality TV” and racism played, read this

I am one of the people outraged at what happened to Aiyana Stanley-Jones in Detroit. Not just because the police carelessly burned and executed a seven year old girl sleeping on a couch. That is bad enough. Despite the fact that police received warnings that there were children in the house. That is worse. But most of all because the police, and whoever heads the police, think black people are worthless enough to be used as props on the latest thin-brained reality TV show. Aiyana Stanley-Jones died that day for a few minutes of televised entertainment. Long before that, white power brokers dehumanized and alienated the members of the black community to the point where they lost their intrinsic value as people in the eyes of the police. And this is the real reason why Aiyana died, like so many before her.

Racist violence is resurging in America. Where is the leadership for justice and compassion?

What a week.  One shooting at Fort Hood, then a second shooting in Orlando…a bit closer to home (Portland, OR), the 3rd shooting of the week…because she filed for divorce??  And a fourth shooting and a fifth shooting in the Portland-metro area.  In all five cases the perpetrators are men.

In the last three four SIX SEVEN EIGHT local murders in a matter of weeks, it is the same old story…

Assuming 1 keyword per comment, ~15.5% of comments are sexist or racist

Cartoon: A Concise History of Black-White Relations in the United States 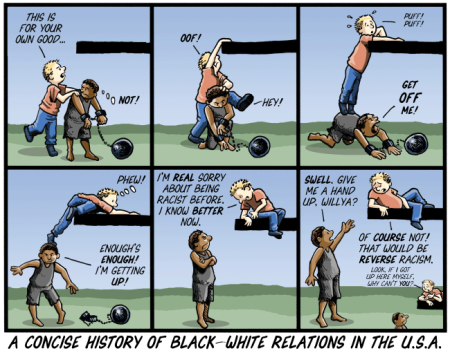 Who is Diezel P?

DiezelP is one of many talented up and coming emcees who are involved in the beginning stages of a collaborative project entitled “HAVEN:  Hip Hop Against Violence Everywhere Now”